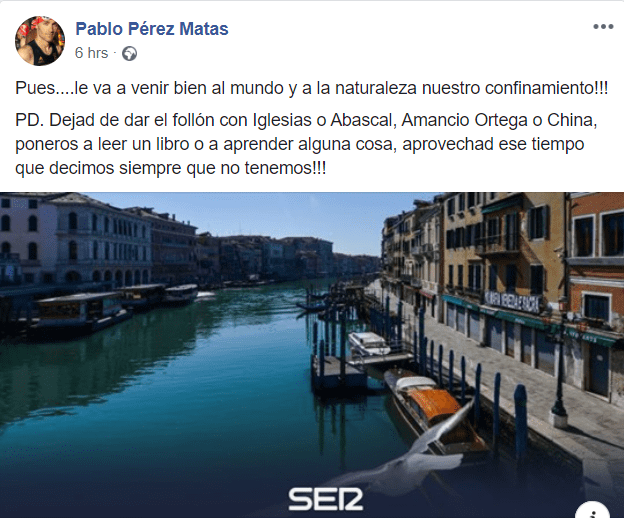 By my friend and old triathlon and running coach Pablo ‘Trimatas’ in Albacete, Spain. A loose translation:

Well…our quarantine is going to do wonders for the world and the environment.

P.S. Stop kicking up a fuss at Iglesias or Abascal [politicians], Amancio Ortega [Zara founder] or China and read a book or learn something new; make the most of this time that we always say we don’t have!!!

I always try to practise what I preach, so during Rome’s lockdown I’ve just finished reading Range: Why Generalists Triumph in a Specialized World by David Epstein. As I’ve done many times before with interesting books (list of blog posts at the bottom), I’ve harvested the best quotes to apply to the world of learning and teaching, which should of course also be applied to the world beyond…

‘And he refused to specialise in anything, preferring to keep an eye on the overall estate rather than any of its parts…And Nikolay’s management produced the most brilliant results’ – Leo Tolstoy, War and Peace.

2. The Cult of the Head Start

‘Specializing education choices early…is sort of like being forced to choose at sixteen whether you want to marry your high school sweetheart. At the time it might seem like a great idea, but the more you experience, the less great that idea looks in hindsight.’

‘The bestseller Talent Is Overrated used the Polgar sisters [chess pros cultivated from birth by their father] and Tiger Woods [golf legend cultivated from birth by his father] as proof that a head start in deliberate practice is the key to success in a wide-ranging review of research that rocked psychology because it showed experience simply did not create skill in a wide range of real-world scenarios, from college administrators assessing student potential to psychiatrists predicting patient performance to human resources professionals deciding who will succeed in job training. In those domains, which involved human behavior and where patterns did not clearly repeat, repetition did not cause learning. Chess, golf, and firefighting are exceptions, not the rule.’

James – This concept went against one of my previously deeply-held beliefs – the 10,000 hour rule, which states that 10,000 hours of deliberate practice is enough to achieve mastery in any skill. After watching a direct debate between a proponent of that idea, Malcolm Gladwell – author of many outstanding books, including Blink – and David Epstein, the author of Range and The Sports Gene, I was glad to be able to update my thinking: our genetic starting point is extremely important, then a tremendous amount of deliberate practice (10,000 hrs seems a very rough estimate, at best, but it’s used to capture public attention rather than be an accurate statistical fact) plus a myriad of other variables such as intrinsic motivation and the love of the activity can slowly lead to expertise.

3. When Less of the Same is More

‘The challenge we all face is how to maintain the benefits of breadth, diverse experience, interdisciplinary thinking, and delayed concentration in a world that increasingly incentivizes, even demands, hyperspecialization.’

‘Our greatest strength is the exact opposite of narrow specialization. It is the ability to integrate broadly. According to Gary Marcus, a psychology and neural science professor who sold his machine learning company to Uber, “In narrow enough worlds, humans may not have much to contribute much longer. In more open-ended games, I think they certainly will. Not just games, in open ended real-world problems we’re still crushing the machines.”’

James – How do our education systems reflect this reality? What kind of world are we preparing our students for? Factories have their own robots now who can work 24/7 without even a toilet break; we need to prepare students who can think flexibly and apply knowledge from a wide range of areas to a wide range of problems.

‘Chunking helps explain instances of apparently miraculous, domain-specific memory, from musicians playing long pieces by heart to quarter-backs recognizing patterns of players in a split second and making a decision to throw…The chances of a competitive chess player reaching international master status (a level down from grand master) dropped from one in four to one in fifty-five if rigorous training had not begun by age twelve. Chunking can seem like magic, but it comes from extensive, repetitive practice.’

‘When experienced accountants were asked in a study to use a new tax law for deductions that replaced a previous one, they did worse than novices. Erik Dane, a Rice University professor who studies organizational behavior, calls this phenomenon “cognitive entrenchment.” His suggestions for avoiding it are about the polar opposite of the strict version of the 10,000 hours school of thought: vary challenges within a domain drastically, and, as a fellow researcher put it, insist on “having one foot outside your world.”’

James – Keep our learners and ourselves mentally agile.

‘As psychologist and prominent creativity researcher Dean Keith Simonton observed, “rather than obsessively focus[ing] on a narrow topic,” creative achievers tend to have broad interests. “This breadth often supports insights that cannot be attributed to domain-specific expertise alone.” Those findings are reminiscent of a speech Steve Jobs gave, in which he famously recounted the importance of a calligraphy class to his design aesthetics. “When we were designing the first Macintosh computer, it all came back to me,” he said. “If I had never dropped in on that single course in college, the Mac would have never had multiple typefaces or proportionally spaced fonts.”’

‘As Arab historiographer Ibn Khaldun, considered a founder of sociology, pointed out centuries ago, a city dweller traveling through the desert will be completely dependent on a nomad to keep him alive. So long as they remain in the desert, the nomad is a genius.’

James – Some students are fish, others are monkeys, but our testing system is one-size-fits-all. 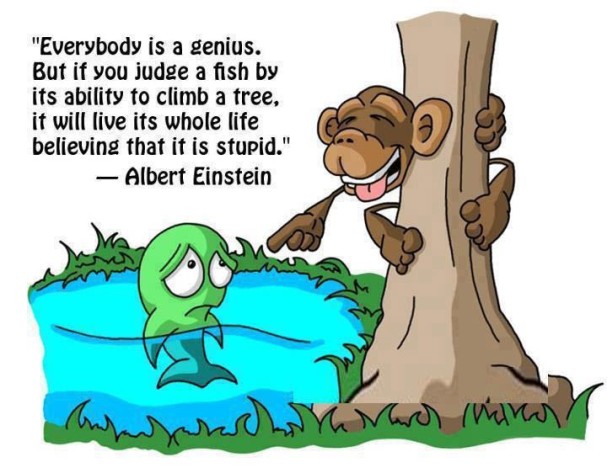 ‘Almost none of the students in any major showed a consistent understanding of how to apply methods of evaluating truth they had learned in their own discipline to other areas. In that way, the students had something in common with Luria’s remote villagers—even the science majors were typically unable to generalize research methods from their own field to other fields. (Professor Jim) Flynn’s conclusion: “There is no sign that any department attempts to develop [anything] other than narrow critical competence.”’

‘“Even the best universities aren’t developing critical intelligence,” he (Professor Jim Flynn) told me. “They aren’t giving students the tools to analyze the modern world, except in their area of specialization. Their education is too narrow.” He does not mean this in the simple sense that every computer science major needs an art history class, but rather that everyone needs habits of mind that allow them to dance across disciplines.’

‘They must be taught to think before being taught what to think about.’

Arturo Casadevall (Johns Hopkins Professor in Medicine): “You have people walking around with all the knowledge of humanity on their phones, but they have no idea how to integrate it. We don’t train people in thinking or reasoning.”

James – Developing critical thinking in our students is a civic responsibility. We only have to glance around at the level of ignorance at deciphering fake news and staying afloat in waves of hysteria during the current coronavirus crisis to see that we, as educators, are failing miserably in this area. Lesson ideas:

‘Duke Ellington: “There was no connection between me and music, until I started fiddling with it myself,” he remembered. “As far as anyone teaching me, there was too many rules and regulations. . . . As long as I could sit down and figure it out for myself, then that was all right.”’

‘Improv masters learn like babies: dive in and imitate and improvise first, learn the formal rules later. “At the beginning, your mom didn’t give you a book and say, ‘This is a noun, this is a pronoun, this is a dangling participle,’” Cecchini told me. “You acquired the sound first. And then you acquire the grammar later.”’

James – There is nothing more akin to improv than a conversation in any language. This is in line with Krashen’s theory of comprehensible input or i+1 incrementation.

‘According to the Suzuki Association of the Americas, “Children do not practice exercises to learn to talk. . . .Children learn to read after their ability to talk has been well established.” In totality, the picture is in line with a classic research finding that is not specific to music: breadth of training predicts breadth of transfer. That is, the more contexts in which something is learned, the more the learner creates abstract models, and the less they rely on any particular example.’

‘Struggling to generate an answer on your own, even a wrong one, enhances subsequent learning. Socrates was apparently on to something when he forced pupils to generate answers rather than bestowing them. It requires the learner to intentionally sacrifice current performance for future benefit.’

‘It can even help to be wildly wrong. Metcalfe and colleagues have repeatedly demonstrated a “hypercorrection effect.” The more confident a learner is of their wrong answer, the better the information sticks when they subsequently learn the right answer. Tolerating big mistakes can create the best learning opportunities.”

‘Struggling to retrieve information primes the brain for subsequent learning, even when the retrieval itself is unsuccessful. The struggle is real, and really useful. “Like life,” Kornell and team wrote, “retrieval is all about the journey.”’

James – Elicit patiently and never stigmatise errors. This is a key pillar of one of the foundations of my teaching practice: encouraging a Growth Mindset (several articles on what it is and how to apply it in the classroom and staff room on the Mindset section of the blog here).

9. Testing and Learning Aren’t Twins; They Aren’t Even Distant Cousins

‘As with excessive hint-giving, it will, as a group of psychologists put it, “produce misleadingly high levels of immediate mastery that will not survive the passage of substantial periods of time.”’

‘The most basic message is that teachers and students must avoid interpreting current performance as learning.’

James – We’re often forced to prepare students for specific exams. However, don’t confuse a good exam mark with real-life, long-term learning, and please make sure your students and their parents recognise the difference too. A longer rant in my article Exam Obsessed, written while working in Spain in 2016.

10. Prepare Students for the World Beyond Now

‘“Increasingly,” according to Duncan, “jobs that pay well require employees to be able to solve unexpected problems, often while working in groups. . . . These shifts in labor force demands have in turn put new and increasingly stringent demands on schools.”’

‘Knowledge increasingly needs not merely to be durable, but also flexible—both sticky and capable of broad application…Learning deeply means learning slowly. The cult of the head start fails the learners it seeks to serve. Knowledge with enduring utility must be very flexible, composed of mental schemes that can be matched to new problems.’

‘Learning stuff was less important than learning about oneself. Exploration is not just a whimsical luxury of education; it is a central benefit.’

James – Learners are not vessels to fill with facts. Give them life skills and promote applicable tools they will be able to use the rest of their lives such as Media Literacy and the 4 C’s: Critical thinking; Creativity; Collaboration; Communication.

**Any questions or comments, please leave a Comment below or send me an email at jegerton89@gmail.com. Thanks for reading!**

Other books harvested for knowledge:

The Power of Habit

Ego is the Enemy

21 Lessons for the 21st Century

Pour Me: A Life

5 thoughts on “Range: Why Generalists Triumph in a Specialized World (Part I)”

If you were wondering about the quote up there, credit goes to Matthew Syed – author of Bounce (which I’ll reference occasionally and 100% recommend).